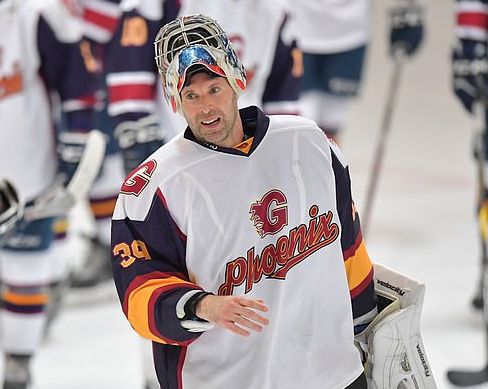 Just so this makes sense from the outset, there are two sports that stir fan passions in the Czech Republic:

The Czechs do what they can to be relevant at the international level in football, but their national hockey program is a fixture on the hockey stage. It joins the likes of Canada, the USA, Sweden, Finland, and Russia as a perennial threat to win major tournaments:

Things have changed in hockey since Petr Čech's youth. Back then, being 6-5/196cm meant you were too tall to be a goalie but an ideal candidate for a goalkeeper.

Dude was a bit of alright at the latter:

Now that he's financially secure and his best athletic days are behind him, the 37-year-old has decided to scratch a lifelong itch and trade up to a sexier helmet.

Dude's tending goal for a fourth-tier hockey side in the London area: the National Ice Hockey League 2's Guildford Phoenix.

OK, Selita Ebanks dressed up as a phoenix would definitely bring in the fans whether or not they're into hockey, but Čech's presence actually did a decent job of packing them into Guildford's tiny arena, too.

What's more, his celebrity appearance proved to be beneficial. Čech did more than hold up his end of the bargain:

For the record, Čech went 2-for-4 in the shootout with Swindon's Wildcats. His elite athleticism showed in the ensuing sudden death round. Needing a save to seal the deal, he stopped a low shot to his left. Victory was his.

Dude's actually listed as the club's third-string goalie, which makes sense. The Phoenix serve as the feeder team for the Guildford Flames, who play in the British system's top tier.

They don't mind the PR the Phoenix got from Čech showing up in goal, but they're more interested in developing future Flames to rise through the ranks and serve their cause.

Dude intends to get into a few more games, but this doesn't mean he's bagging his technical advisor duties at Chelsea FC.

That's where it'll be his job to get a few prospects rising to serve the Blues.

If nothing else, he's getting a refresher in how the process works.