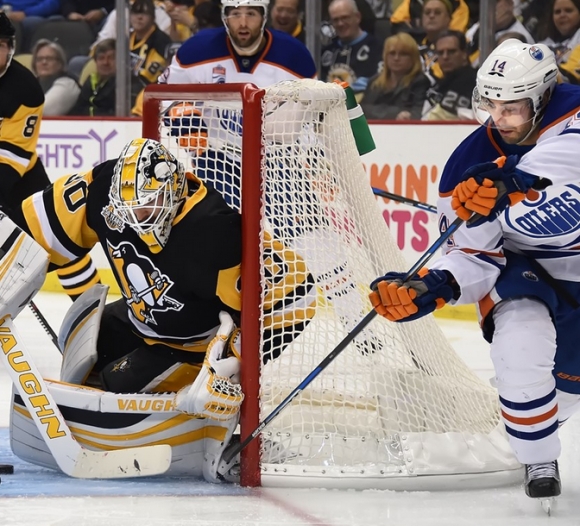 How do the Edmonton Oilers ...

Coach Todd McLellan has to be wondering the same thing for his 2-5-1 Oil.

On the bright side, at least they're finally getting some goaltending after surrendering 19 markers in their first five games.

But against the Cup-holding and Met-leading Pittsburgh Penguins, even excellent tending isn't always enough.

Especially when Matt Murray's standing on his head with saves like this:

Not that Cam Talbot was chopped liver in this one.

Phil Kessel's going to his backhand allowd Talbot a post push that got him to this shot in the nick of time:

That was one of Talbot's 42 saves, but it still wasn't enough to keep Pittsburgh from posting a 2-1 overtime triumph.

Fans packed the Igloo in anticipation of the third-ever meeting between Sidney Crosby and Connor McDavid. The Kid was held to five shots of no consequence, but McDavid was dangerous all night.

Murray did well to stop this swoop:

Meanwhile, after a scoreless dual for two periods, Talbot surely couldn't be blamed for Ian Cole's seeing-eye shot that mad it through six bodies to put the Pens on the board:

And it was the reigning Hart Trophy holder who went 2-hole to snipe the Oil's lone goal:

That's the sorta marksmanship even the Waco Kid would admire.

But in overtime, after a nifty assist from Geno Malkin, Kessel finally got the best of Talbot for the winner:

The Pens will no doubt keep doing what they do, all the way to their Stanley Cup defense in the spring.

The Oil, on the other hand, will head back to Alberta thinking they may finally have their defense and 'tending sorted. Now, they just need a few dudes to step up and help McDavid light the lamp.