Oilers' Future Shows Up, All in One Game 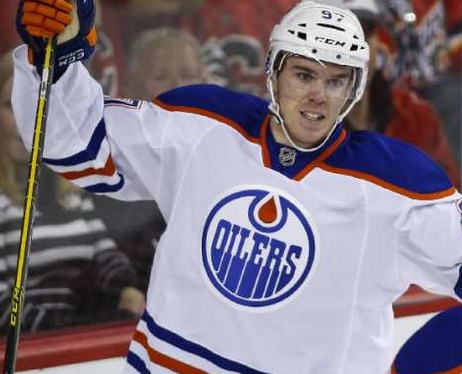 Sooner or later, Edmonton has to put it all together.

Years of lousy hockey has enabled the Oil to stockpile top draft choices.

Maybe they're about to start cashing in.

For the first time. each of their first overall picks scored in the same game. The Calgary Flames fell, 5-2, to the onslaught of Taylor Hall, Ryan Nugent-Hopkins, Nail Yakupov, and Connor McDavid:

This display couldn't come soon enough, as the Oil opened this season with four straight losses. Coincidentally, the Flames were 1-3-0 coming into this match, so it was the perfect time for Edmonton to pounce on their Albertan rivals.

With a new GM in Peter Chiarelli and head coach in Todd McLellan, excitement began to build this summer in the NHL's northernmost outpost:

If this is a tune-up year under new management, then, will next season actually usher in another era of Oiler dominance?

That's not so easy to do anymore, but hopeful Edmonton fans will be dreaming of a 1984 repeat, when the dynasty torch was passed from the New York Islanders to Wayne Gretzky, Mark Messier, Jari Kurri, Paul Coffey & Co: