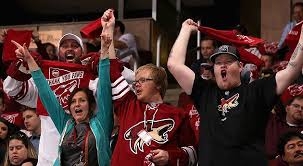 As a result, so do the Phoenix Coyotes, newly christened to reflect the fact that the City of Glendale is their landlord for at least the next five years.

The NHL commish was in his element during the final stages of this lingering drama, setting the chessboard masterfully:

As a result, Bettman was the recipient of something he rarely hears from hockey fans: cheers for something he actually did.

The appearance over the horizon of Global Spectrum was the capper. A subsidiary of Comcast Spectacor, it is the corporate owner of the Philadelphia Flyers and operator of successful sports and entertainment venues across the continent. Ironically, this includes the Comcast Arena in Everett, Wa -- less than an hour's drive north of Seattle -- and coincidentally, this also includes the University of Phoenix Stadium, home of the Arizona Cardinals and right next door to Jobing.com Arena.

In short, there is no way -- no way -- a municipality can ask for better than Global Spectrum to run a facility. It's a coldly efficient megatron of a business; it does not take on charity cases. If Global Spectrum says it will become involved, then it sees viability. Again, Glendale has the perfect case in point right next door to Jobing.com Arena.

So now it's up to the Coyotes to show they're worth it. Positive signs abound. The team is competitive and looks to stay that way for the immediate future. The marketing department is creative. And like other southern outposts, the Coyotes have fostered a strong youth hockey infrastructure; a generation can pass before it takes root, but looking at similar scenarios in the likes of Los Angeles, San José, Dallas, Tampa Bay, and south Florida, it's not unusual anymore to see players with those addresses becoming prominent in major college and major junior hockey programs. In the process, an increased fan base for hockey becomes the eventual result.

Like desert fauna that finds a way to survive in abnormal conditions, the Coyotes like where they are and have fought to stay there.

With an anchor tenant and a strong operator in place, the city council's next task is to complete their vision of a vibrant sports and entertainment complex surrouding the stadium and arena. After last night's vote, they have a strong chance of succeeding.