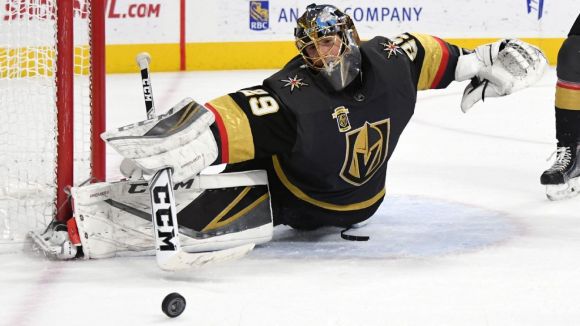 There's nothing like a little passive-aggressive goalie smack talk to usher in a brand new season of NHL hockey.

Marc-André Fleury and his Vegas Golden Knights kicked the season off with a grudge-fueled home-and-home with the San José Sharks.

Of course, those clever schedule makers were quite aware that the Sharks had knocked the Knights outta the playoffs last year in seven grueling skates.

Well, the Knights were able to exact some measure of revenge by taking these first two games in convincing fashion.

Indeed, dudes are feeling pretty good about life at the moment.

In fact, the Vegas netminder has figured out a way to compliment his next opponent while simultaneously taking a shot at the Sharks:

Marc-Andre Fleury: “I feel like we’ve played San Jose 42 times in a row now with last year’s playoffs so it will be good to face somebody else. I think Boston is a really good team and they’ll be a bigger challenge than San Jose was”

Shit, he even managed to do it in the same sentence, which is an impressive economy of words.

The fun-loving goalie has been going out of his way to screw with the Sharks lately, even giving away some of their equipment in the middle of a recent game:

Fleury literally giving away Sharks players sticks through the photography hole after a line brawl 😭😂😂😂 pic.twitter.com/CQ4LYXui9g

I asked Marc-Andre Fleury about giving the stick to a fan during the fights and he laughed.

Why he's even developed relationships with some of their fans:

Marc-Andre Fleury stopping for photos with Sharks fans on his way to the locker room. #VegasBorn pic.twitter.com/GO5KoM3T4a

As far as that tussle with the Bruins, it turns out that Fleury was prescient:

Beautiful sequence all around.

Pastrnak with the sweet indirect, bank pass off the boards.

Marchand finishes with the snipe.

They're a really good team.