How Dumb Are the Blue Jackets? Ask Tortorella 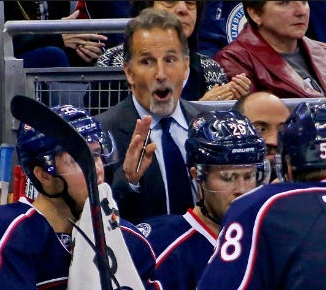 Expectations are definitely higher in Columbus this season.

The Blue Jackets came outta nowhere last year to make the playoffs, where they ran into a white-hot Marc-André Fleury and the eventual Stanley Cup champion Pittsburgh Penguins.

Their crowning achievement was a 16-game winning streak that was one short of the NHL all-time record.

Dudes roared outta the gates this time around, winning five of their first six games.

Then the road got bumpy. The Jackets went through a 4-3 stretch before dropping four in a row.

Fiery coach John Tortorella's temperment is such that he was probably waiting to blow a gasket by then, and after a sloppy 5-3 loss to the Rangers in Madison Square Garden, he took the occasion to add to his body of work:

Duly inspired, Columbus went out and dropped two more before snapping their skid against Detroit.

However, it took goalie Sergei Bobrovsky standing on his head in an eight-round shootout to do it after making an incredible skate save in overtime:

As an aside, good to see the only player in the four major North American sports whose surname doesn't include a vowel featured in that clip.

Too bad for the Red Wings that Czech right winger Martin Frk got stoned by Bobrovsky, too.

Anyway, that streak snapped moved the Jackets' record back up to 10-7-1, good for second in the Metro behind this season's early surprise, New Jersey's Devils.

Looks like the Devils could be back to the days when they could do no wrong, even when they absolutely did wrong:

Anyway, Torts isn't about to let his pedal off the metal with his squad.

The front office has built a solid roster that can roll four lines with the best of them and now has a game-changing skater in Artemi Panarin. It's still a stunner that the Chicago Blackhawks were willing to deal him in order to get Brandon Saad back, but Columbus isn't complaining.

Neither is Tortorella, except when he is.