Here's a Twist on the Famous Forsberg Shootout Move 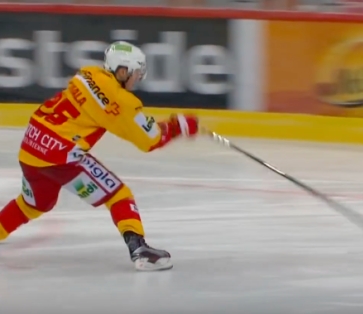 They used to be rare, only coming into play when a skater got hauled down from behind on a breakaway.

However, in the interest of broadcast time allotments, they've been deciding tie games for years in Europe and international tournaments.

Now that the NHL deploys them, penalty shots have become commonplace.

Believe it or not, the success rate for shootout goal hovers in the 32%-35% range. So it's no surprise that some players look to get more creative to improve their chances.

Swedish legend Peter Forsberg helped win a gold medal in the 1994 Lillehammer Olympics with a slick move that took penalty shots to a new level:

There have been variations on that theme over the years, with the latest coming off the stick of Finnish player Toni Rajala, now with EHC Biel in Switzerland's top division.

Dude copied Forsberg's one-handed finish, but his deke was to actually take the shot before the goalie expected it:

While Forsberg's basic move stands above them all for its sheer simplicity and ballsy execution, there are others.

Here's a compilation of creative skaters, some of whom prove that Forsberg's masterpiece never gets old:

Rajala's obviously happier in Europe, and given the fact that NHL players won't be going to the Olympics in February, dude's got a chance to be one of the standout skaters.

Especially if Finland needs to win in a shootout.