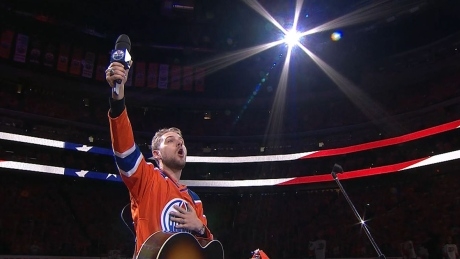 Well, you don't see that every day.

Before the Edmonton Oilers' first home playoff game in 11 years against the Anaheim Ducks, the traditional singing of the anthem took a turn for the surreal.

Someone named Brett Kissel, who's apparently a country music artist of some kind, started singing The Star-Spangled Banner when he realized the microphone wasn't functioning.

The entirety of the 18,347 fans in attendance decided to get involved.

No, not this time.

These super cool Canadians decided to extend the old Maple Leaf in solidarity.

Why the microphone malfunctioned is anyone's guess, but the spontaneity of that many people singing together in unison is a bit of alright.

Reflecting the goodwill of their fans, the Oil lost the actual game to their guests, 6-3.

However, they did win some respect from the Ducks.

Perhaps we can just let the fans sing every anthem going forward.

It couldn't be any worse than this: