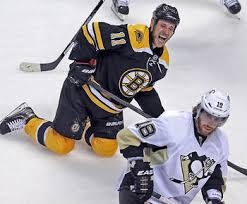 This is an opportune moment to recall the legend of El Cid.

Armored for his final charge in the Siege of Valencia, the narrative states that Cid's army was so inspired by his presence that they charged on to victory against insurmountable odds.

Not bad leadership for a dude who was already dead.

Again, this was legend, enhanced by the fog of centuries. But it underscores the point that extraordinary effort with total disregard for physical consequences during the course of an intense cause can and will inspire others to greater heights.

The Stanley Cup is as intense a cause as it gets in the world of sports.

Enter Gregory Campbell, fourth-line grinder for the Boston Bruins, as the latest personification of Cup intensity. Not even a top-quality shin pad could keep the puck from fracturing his leg. And not even searing pain could keep him off the ice during a key penalty kill against one of the most volatile power plays in the game. Campbell finished the final 40 seconds of his shift, and helped keep Pittsburgh off the scoreboard.

Note that the Bruins won Game 3 in double-overtime. Who knows if the shot Campbell blocked would have tipped the scales in favor of the Penguins had it reached the goal? If so, Pittsburgh would have only been down two games to one with a reasonable expectation to even the series quickly. As it is, the B's are now in a commanding 3-0 position and will be seeking a spot in the Cup finals with a victory on home ice on Friday 7 June.

Campbell got the news today that his campaign is over, yet another indication of his injury's severity.

Pittsburgh's Evgeny Malkin was the shooter. He's a sniper of elite magnitude. It's easy to imagine a heater from him breaking bones at close range. It's just as easy to imagine anything he puts on net getting through for a score, especially on a power play.

Obviously, Campbell was aware of all that. And still he went down for the block with no hesitation.

He joins a list of dubious dignitaries that includes Duncan Keith, the Chicago Blackhawks defenseman who lost seven teeth to a cannonading puck during the victory that put his team into the Stanley Cup finals in 2010, where they would ultimately prevail. Like Campbell, he played through the injury.

So did Eric Belanger of the Washinton Capitals.

These are the lengths players will go to raise the Cup.

Said Gregory's teammate Brad Marchand after the game, ""The fact that he took that shot and he couldn't even move and he was still trying to play and get in the lane, he did a great job. We really wanted to play for him."

Fellow players understand the sacrifice, which is why such incidents foster so much inspiration.

Gregory's heroics ended his personal Cup run, but another Bruin grinder is ready to step in to fill the same role. And if he has to put himself in harm's way, too, he will do it.

Without hesitation. Because it's the Cup.