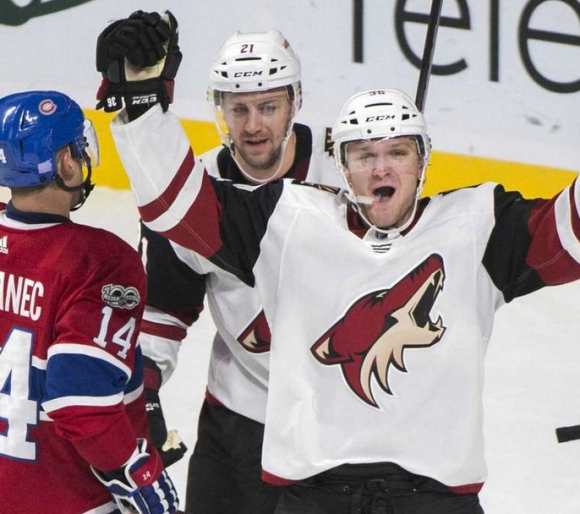 In their existence as a hockey club from Arizona, it's fair to say this crew's only had two notable moments:

It's possible that there's more news about the Coyotes on business websites than the sports sites.

There's no doubt they chose the perfect mascot.

Arizona made the correct assessment that they couldn't go any lower right now, what with all the turmoil over where in the desert they're gonna get an arena deal.

So why not rebuild? Young hockey players are hella less expensive than veterans. All the 'Yotes needed to do was bring in a few experienced dudes to pass along a tip or two and give the fans a glimmer of hope when the puck drops.

How the popular Shane Doan didn't meet the job description for seasoned veteran is anyone's guess.

Worse, many of the old hands Arizona expected to lead the way did, all the way to the disabled list. Former Blackhawks blueliner Niklas Hjalmarsson is there again, but at least starting goalie Antti Raanta was back in action.

Add up all the misfortune, and the sorry total was 2-15-3 after dropping a 4-1 decision at Winnipeg.

Even more depressing was the club's two victories happened in overtime. This meant they set an NHL record for futility.

No team had ever gone 20 games into a season and not registered a regulation win.

And then, who woulda guessed that fate would smile upon them in Montréal's Bell Centre?

Especially when the game started with a brutal line change:

Pops clearly taught him lots about hockey, except maybe when not to pinch. When one's skating style looks like a panicked kayaker, gotta be more careful than this:

Ultimately, the third period rolled around, and the Coyotes found themselves down, 4-3.

That's when a couple of minor miracles -- in the form of two minor penalties -- shone on Arizona:

Jordie Benn picked the wrong time to grip his stick too tight.

Christian Fischer was clearly passing to Oliver Ekman-Larsson -- who did know when to pinch -- but Derek Stepan gladly cleaned up the surprise deflection.

Then, the 'Yotes got the sorta goal that a team needs to snap outta their funk:

Fischer for the winner.

Odds are this won't alter Arizona's season all that much.

Their task now is to avoid making any more negative history.