You Just Can't Unsee What Happened to Cairo Santos on Sunday 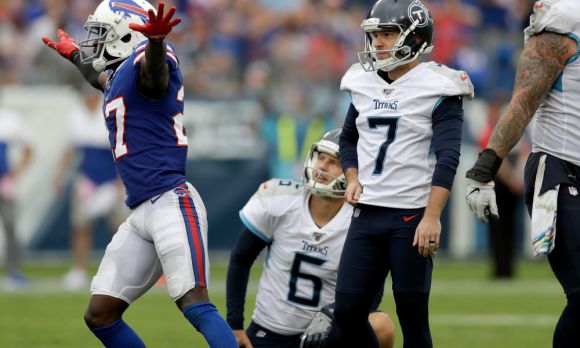 Any human person with the ability to process empathy has to be feeling bad for Cairo Santos today.

The now-unemployed former Tennessee Titans kicker experienced the absolute nightmare scenario for every kicker on the planet against the Bills on Sunday.

This poor dude missed an astonishing four field goals in a game his team lost by seven points.

He probably would've missed five or more, but mercifully was only allowed to attempt four.

There was also a blocked 33-yarder for good measure.

The 53-yard attempt came in the fourth quarter of a one-score game after the previous three misses, prompting a very specific line of questioning towards head coach Mike Vrabel:

Cannot believe Mike Vrabel is defending his decision to send Cairo Santos back out for a 53-yard field goal in the 4th after 3 previous misses. #Titans @WSMV pic.twitter.com/Sl8mQyS71h

Please keep in mind this kick was attempted on a 4th-&-4 midway through the fourth quarter of a seven-point game.

Vrabel's gibberish aside, dude had very little chance of making that kick after what'd gone down previously.

Cairo Santos is 0/3 on the day

Cairo Santos MISSES HIS FOURTH FIELD GOAL. 12 POINTS LEFT ON THE BOARD. 12 POINTS WOULD HAVE THE TITANS IN THE LEAD. NEW KICKER BY WEDNESDAY I PREDICT. #BUFvsTEN

Well, despite the all-caps yelling, this fan's prediction was in fact correct.

In an amusing twist, the Titans are reportedly looking at uprights fetishist Cody Parkey as his replacement:

That about sums it up.