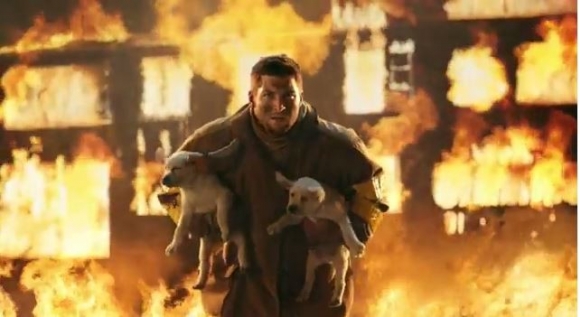 Despite the fact that Tim Tebow is currently not on an NFL roster and may never be again, some still seem to enjoy using the former Heisman Trophy winner as a perpetual punchline.

As a matter of fact, he cashed in on the trend itself during the Super Bowl.

There may not be an easier target out there than Tebow, and you can rest assured that anytime his name is mentioned in the context of playing the position of quarterback successfully in the NFL, it will be accompanied by sarcasm and derision.

It appears that many players and fans almost instinctively use his name in such a fashion, like it's some sort of legal mandate.

The latest example of this phenomenon occurred during one of those silly TMZ ambush interviews. This one involved Philadelphia Eagles running back LeSean McCoy at an airport. Of course, since we're talking about TMZ, the highest journalistic standards were adhered to during the interview, and the level of content was extremely highbrow in nature.

Obviously, none of this should be taken seriously, but it serves to illustrate a point about the Tebow stigma.

Regardless of the cause for the Tebow loathing -- be it poor quarterbacking or vocal Christianity or any of the other seemingly countless reasons -- the initial reaction when discussing the former Gator is never positive. In the case of McCoy, his first response was one of amusement.

Tebow recently signed with ESPN to work on the SEC Network as an analyst. The former first-round pick should fare well with his new gig, but though he still claims to desire another chance at the NFL, it's probably not going to happen.

Tebow will remain a polarizing figure for years to come, whether or not he ever plays in the NFL again. However, time tends to erode the memory, and eventually his name will be mentioned less and less as other player’s filter in and out of the league.

Imagine how relieved Ryan Leaf was when JaMarcus Russell came along.