The London Jaguars Will Continue to Play Games in Jacksonville 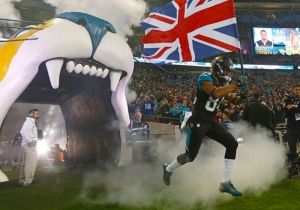 Its city fathers may not admit it, but when viewed in the harsh light of cold reality, Jacksonville backed into being awarded an NFL franchise in 1993.

They liked that these two cities had proven NFL fan bases and corporate sponsors, tacitly admitting their franchises both left town due to the whims of their cabal's two biggest jerks.

For most of the Jacksonville Jaguars' history, they've looked like a franchise the NFL settled for.

When the team's most accomplished QB -- Mark Brunell -- was traded to the Jags, his notorious first question was, where's Jacksonville?

The irony is it's the largest city by population in Florida and the USA's largest by area. However, there's a dearth of corporate headquarters to snap up big-buck sponsorships, and ticket sales usually lag among the NFL's bottom three.

Those figures are boosted by the Jags' annual visit to London, where games there count towards around 13% of their 'local' revenue. With that in mind, what's an owner to do?

Happy hour math -- as opposed to industrial-strength accounting calculations -- pencils the Jags to improve their 'local' revenue bottom line by another 13% or so if Shad Khan moved another home game to Jolly Old.

The players definitely have a point.

Predictably, based on the fans' rolling tweet excerpts in that report, this news isn't exactly pleasing the Jags' locals on this side of the pond.

It sounds like Khan is laying out the chessboard quite cleverly: