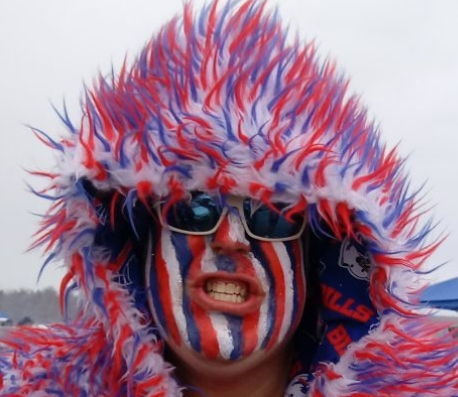 Don't think a heavy helping of winter was enough to deter those hale and hearty sports fans in Buffalo.

That's what those dudes plow through whenever the Sabres drop puck.

It's more likely because the Bills had lost four of their last five games that kept fans away from Rich Stadium.

But they're hardcore in Upstate New York.

On the bright side for Buffalo's fortunes, though, third-party ticket prices for their Week 14 game with an extremely beatable Indianapolis Colts team -- 3-9 this on any given Sunday -- rose by 50% on game day.

Give the Colts credit. For a dome team, they acquitted themselves well in this rare winter frolic.

All things considered, the day did offer a multitude of entertaining moments that football fans don't exactly see every day.

Which they could in those moments when the fog lifted.

The locals were ultimately rewarded when their dudes prevailed in overtime, 13-7:

So now, the Bills are 7-6 and scrapping to be playoff fodder.

The way it'd gone for them over the preceding five weeks, that fact alone defies reality.

It's impressive what a stiff wind can do to reality.