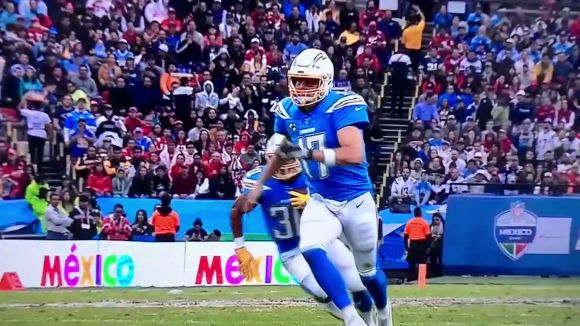 Phillip Rivers will be turning 38 in a few weeks, and the mileage is beginning to show.

The longtime Chargers QB and prolific reproduction specialist played one of the worst games of his lengthy career on Monday night in Mexico City against the Chiefs.

However, despite the apparent deterioration of his physical skills, Rivers still appears to have most of his mental faculties intact.

One particular play in this shitstain of a football game provides clear evidence of his limber mind.

Yes, we believe so.

Check out this sound decision-making:

That's a veteran deciding in real time that the contact just wasn't worth it.

Even though Phil absolutely did the right thing, the Twitter went ahead and mocked him, anyway:

Philip Rivers just threw the worst block in the history of blocks including the games played in leather helmets.

Clearly, Phil Rivers is much too complex to be compartmentalized in such a fashion:

I’m just going to say it, Phil Rivers just isn’t angry enough. The one touchdown drive tonight he yelled at someone literally every play.

One more interception and we’re going to get a fight. pic.twitter.com/GY2IHQqzlj