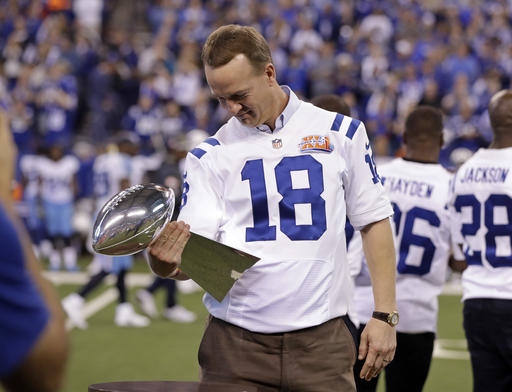 When attempting to establish a bond with another person or inanimate object, eye contact is critical.

Well, Peyton Manning has clearly developed a relationship with the Super Bowl trophy that can never be severed.

The 2006 Super Bowl champion Indianapolis Colts recently celebrated the 10th anniversary of their magical triumph over the Chicago Bears.

While a good time was had by all at halftime of the Colts game against the Tennessee Titans, it was clear that Peyton and the trophy just wanted some quality time alone.

Dude even discussed this bond with the media but seemed a bit distracted, as he gets crazy jealous at the mere thought of former teammates sharing time with his one and only.

As most relationships go, there have been some ups and downs between Peyton and the trophy, and they haven't always been on the same page.

But it's clear the two are back on track now.

The future Hall of Famer stared lovingly at the trophy for what seemed like hours, making the rest of the team as well as the capacity crowd on hand visibly uncomfortable.

Peyton probably loves his wife and children very much, but the passion he shares with the Super Bowl trophy may never be equaled.

Well, with the possible exception of Budweiser.

Seriously, they should all just get a room.