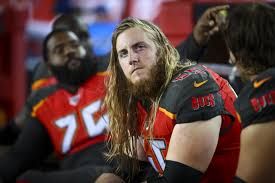 You can alway hear old people talking about back in the day.

Even you young dudes have got to admit it was a bit different back then.

You young dudes and dudettes have no clue what Old School is. You'd never make it with those rules.

An offensive lineman for the Tampa Bay Buccanneers. Trust me. Dude's Old School with a capital Old.

Seems that Cappa broke his arm when Bruce's Boys played the Saints. In the second quarter!

Cappa played all 59 snaps on offense plus four more on special teams.This is total badass!

I'm talking Ronnie Lott cutting off his finger in the middle of the game and then going back in badass.

Honorable mention to ever player who got the turkey stuffings knocked out of him and then waved some crap called smelling salts under his nose and kept playing!

When he was asked about his injury, he repled that it was just a bruise.

Dude's gonna miss a few weeks with the broken arm but probably not as many has most of today's players would.

Alex Cappa's on the All Old School Team!