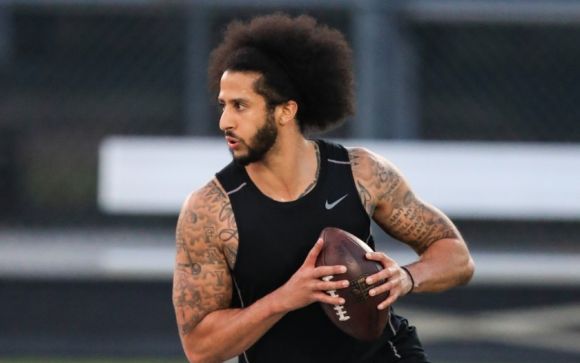 Representatives of at least seven NFL teams chose to follow Colin Kaepernick and his entourage as they shifted his workout from the Atlanta Falcons training facility to a local high school.

Who knows how The Shield will officially react to that development -- fearing the distraction trap again, maybe? -- but it seems like dude made a solid impression.

Just getting it done was half the battle.

The question now is, will any team sign Kaepernick after he's been outta the league since 2017?

Bovada puts it in terms that could make you a bitta pocket change ...

Numbers-wise, there were all sortsa caveats -- such as the San Francisco 49ers sucked in 2015 and 2016 -- but over Kaepernick's final two seasons:

Still, dude only needs one believer outta the 32 NFL teams ...

So, do you believe that's gonna happen? You now have a shot at making your opinon pay off.

We don't have a suggestion either way, but we do have some solid thoughts on four games today. Just know we based them on the early lines. If you're of the belief that we're on to something, please check the numbers to see where they currently stand.

Minnesota is the superior team, averaging 26 points per and only allowing 17.6 per game. Now that Stefon Diggs and Adam Thielen are healthy, the Viking offense is at full strength.

Denver’s defense has gotten better by the week, though. The Broncos also beat Cleveland, 24-19, in their last game. Denver's 4-1 ATS in their last 5. That’s a strong enough trend to back the Ponies. The Saints stunk it up against the rival Atlanta Falcons in Week 10, being dominated to the tune of a 26-9 beatdown.

Dudes had their chances. They left three red-zone trips with field goals. Their defense allowed Atlanta to sack Drew Brees 6 times. Although the Saints looked awful, they should get healthy against Bruce's Boys.

Back New Orleans to dominate in a bounceback effort. This time, the Cardinals get them off short rest. Not only did San Francisco play on Monday, but they went against a big rival, the Seattle Seahawks.

Arizona figures to take advantage of a tired 49ers squad and, while the computer simulations beg to differ, I think they should keep this game much closer than the 13½ points.

The Rams’ offense hit a brick wall in Week 10 in the form of a Steelers crew that topped them, 17-12.

The Rams can get back on track this Sunday by throwing to Cooper Kupp. Dude saw only 4 targets while Robert Woods saw 11. If the Bears ignore Pittsburgh's strategy and let Jared Goff throw more to Kupp, the Rams will win and cover.