Manning Retirement Just Had to Have a Zinger

Published on 7-Mar-2016 by Alan Adamsson 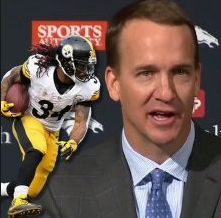 On the bright side, Peyton Manning only retired. He didn't die.

So, apparently, the Pittsburgh Steelers' running back figured that platitudes weren't mandatory, which was fine with him:

Then there's Williams' choice of emojis.

Really, dude? Show a little respect. If you're gonna equate one of NFL history's great chuckers to a hot mess, at least bring out the A-list of poo:

Could this be why Williams is yelling at Manning to get off his lawn?

But today's announcement wasn't about Most Underwhelming Playoff Performance, it was about an 18-year career that had a bit-of-this-bit-of-that, which included four Super Bowl appearances.

Scores of great players have hung around a year or two too long, but not many of them found a way to end it on a championship.

Even Mr Hankey would tip his Santa hat to that.