Larry Fitzgerald: Maybe You Can't Fight the Feeling, but ... 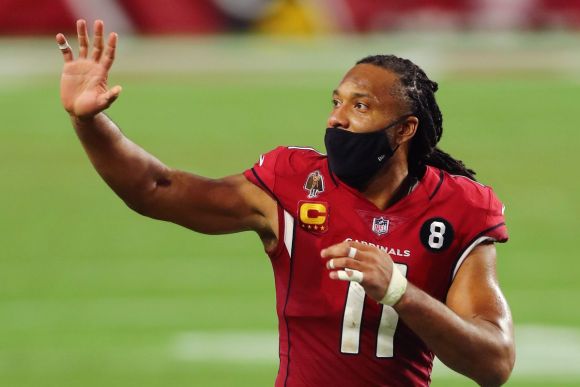 Well, is this an off-season or isn't it?

That's what the holder of 25 NFL records is trying to decide.

It's kinda late for Larry Fitzgerald to be asking that question right now, but if the lure of popping pads and intermittent whistles hasn't drawn him back to the field by now, it seems the situation is gonna linger for at least until mid-season.

By that time, it should become clear as to whether or not the Arizona Cardinals are playoff contenders.

Lotsa stuff would have to go right.

Start with the fact that they're in the ultra-tough NFC West. Playing the San Francisco 49ers, Los Angeles Rams, and Seattle Seahawks twice each will be tasks enough, which is why sportsbooks in general think Arizona making the post-season is a lukewarm proposition.

The Cardinals definitely have an air game. The receiving corps is well-stocked:

At 38 years of age and with 17 NFL seasons of wear and tear already on his body, maybe Fitzgerald is wondering if he'll get sufficient snaps to make the grind worth it.

Dude's already on record as saying he just doesn't have the urge to play right now but doesn't know if that'll change as the season progresses.

And who knows which twists and turns will pop up, because some of them always do.

Does Larry Fitzgerald have the best hands in NFL history? 🐐 @LarryFitzgerald

All of these highlights are from one playoff run. In 2008, Larry Fitzgerald had the single-greatest postseason ever by a wide receiver.

Arizona hasn't been to the playoffs since 2015. Upon further review, dudes probably need more than everything to go right in 2021.

Perhaps they're hoping Pops has some insight into what Junior's thinking that no one else does:

You believe in miracles?🏈👍🕰

It might be more compelling if Al Michaels said it, but all that really matters to the team is that it happens.