Kliff Kingsbury Has an Aesthetic Issue with Madden 20 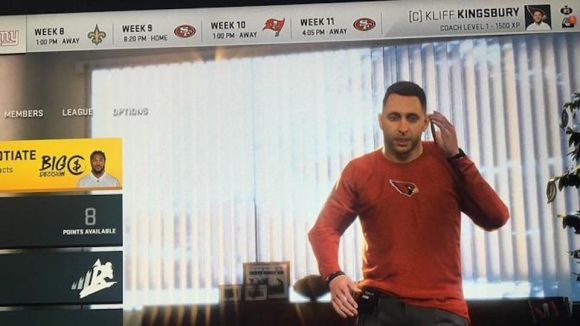 NFL players seem to place an unhealthy amount of importance on their Madden 20 rating.

It's almost become a cliché to hear these dudes complain about an arbitrary number that has zero bearing on actual football.

However, it's pretty rare to hear coaches weigh in on the subject.

Until now, that is.

Flavor of the month Kliff Kingsbury, who was hired by the Arizona Cardinals to lead their franchise in a fit of copycat hubris, is being featured in his very first Madden game.

Now, you'd think a dude who couldn't quite cut it in the Big XII would be super-excited just being included, but the failed former Texas Tech head coach has some problems with his visage.

And here's the zombie apocalypse that Kingsbury is concerned with:

Kliff Kingsbury on Madden 20. Could use more swag, but this is pretty solid. pic.twitter.com/vfUY3rAeYs

Well, The Walking Dead reference is a bit alarmist, as the 39-year-old probably tells a more interesting story with better developed characters and a coherent plot.

And besides, his isn't the most egregious likeness assassination in Madden 20 anyway.

Look at this trash Madden is putting out. Greg Olsen, 3 time pro bowler and only TE to have 1,000 receiving yards in three consecutive seasons, was disrespected by @EASPORTS with this botched character model. pic.twitter.com/qoDR2BGbR5

While Kingsbury recovers from this blow to his vanity, NFL players are indeed still bitching about the rankings.

Hmmm, looks like Keenan Allen won't be needing a copy of the game.

HOLD UP @EAMaddenNFL you not just going to disrespeck me like that with an 89 and get away with it....PUT. SOME. RESPECK. ON. https://t.co/ndDkGvo7gx.