JJ Watt Returns to Wisconsin and Destroys a Child's Bicycle 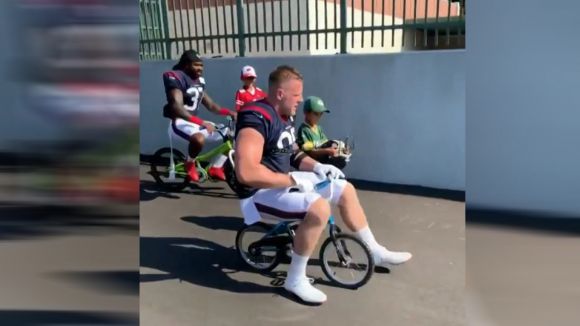 The Houston Texans are currently spending some painfully long days in Green Bay, as the NFL schedule rigidly requires them to be there for a pre-season football game.

Probably looking for something to do, the Texans participated in the quaint training camp bike riding ceremony with the Packers and some local youth.

However, JJ Watt decided to begin his own tradition, which apparently involves crushing the hopes and dreams of one lucky child.

Being a native of Wisconsin, the 30-year-old DE and complete animal felt it was his solemn duty to participate, but things got ugly almost immediately.

#Texans JJ Watt May have broken the bike seat and had to improvise. #Packers pic.twitter.com/v1bw3pa7MW

That seat buckled pretty quick, but the sobbing child was apparently drowned out by the barrage of inane questions being tossed at Watt like concussion grenades.

Fortunately, JJ was soon provided a bike that he couldn't swallow whole.

Here he is. @JJWatt finally gets to ride the 🚲 in Green Bay. The fans love it. #Packers #Texans pic.twitter.com/zz7rmHOYlx

And the young owner of the mangled bike will reportedly be gifted another one.