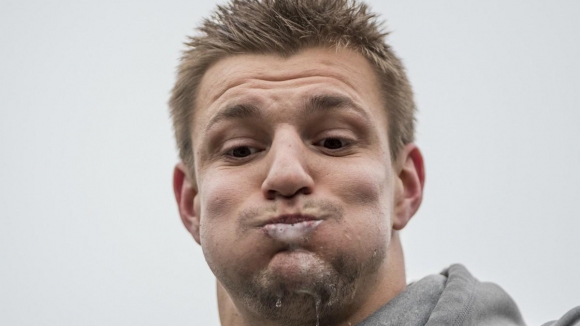 Rob Gronkowski has certainly been making the rounds this off-season, as tradition would dictate.

Back in April, Gronk made an appearance at the White House, crashing a press briefing and startling the already bewildered Sean Spicer in the process.

Recently, the Patriots tight end showed up at a casino nightclub in Connecticut with his brothers in tow.

It appears things may have gotten out of hand.

Well, reports indicate that the brothers Gronkowski ran up quite the bar tab.

How much are we talking about?

You may want to sit down for this one:

Perhaps the least shocking development is the fact that Gronk was shirtless for much of the evening.

While this is all very entertaining, it may not actually be true.

Here is the eloquent Gronk retort:

That oversized check looks relatively normal with this dude holding it.

The bar tab has been confirmed by multiple sources, but it's likely that Gronk didn't pay for any of it.

It seems the privilege of partying with this animal is compensation enough for many club owners.

If only there was a charity that raised money for impoverished liquor distributors.