Carson Wentz Would Like You to Remove That Cowboys Hat 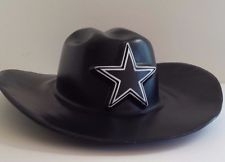 The NFL does on occasion get some things right.

One such example would be the apparent rotation of cities for the NFL Draft.

This year's venue is Philadelphia, a city that, according to rumor, is home to a fairly passionate fan base.

At a pre-draft event on Thursday, this very same fan base reacted negatively to the mere presence of a Dallas Cowboys supporter.

Fortunately, Eagles QB Carson Wentz was on hand to keep the peace.

Actually, the second-year man almost incited a riot by removing the awful symbolism represented by that Stetson.

The seething hatred from those fans was made clear in that reaction.

Of course, the arrogance of that Cowboys fan was equally palpable.

He probably got off easy.

Green Man wouldn't have been nearly as gentle.

Wentz will now likely be treated as a folk hero after his display of bravado.

Well, until he tosses his first pick of the 2017 season anyway.