Aaron Jones Waves Goodbye to Dallas in a Most Condescending Way 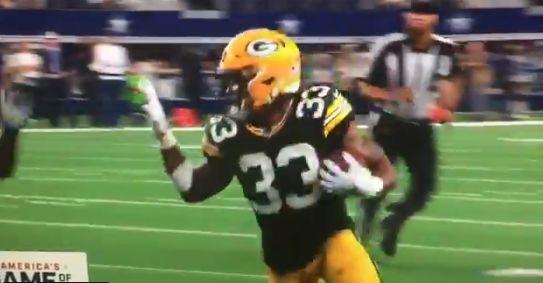 The Green Bay Packers basically did whatever they pleased this past Sunday in JerryWorld, silencing the Cowboys, 34-24.

That final score in no way reflects the reality of just how one-sided this game was.

Many Packers had nice days, but RB Aaron Jones in particular seemed to be enjoying himself.

The 24-year-old UTEP product scored a whopping four TD's on the ground, doubling his season total.

By the third score, Jones was feeling a little sassy, delivering a friendly screw you as he frolicked into the end zone:

Aaron Jones waves goodbye to the #Cowboys, as he goes in for his 3rd TD of the daypic.twitter.com/csgB8PwDNU

This spontaneous too-da-loo was almost dainty, but so very disrespectful.

The Internet sure seemed to enjoy the gesture:

That Aaron Jones wave was incredible. Love the swagger of this team

OK, swagger would be one word for it.

There was one notable voice of dissent, that being from professional Cowboys apologist Skip Bayless:

I used to respect Green Bay. Not any more. What a bunch of hotdogs, showboaters and trash-talkers. Almost had to eat those words.