Who Wouldn't Wanna Be in a Bowl with the Studliest Name? 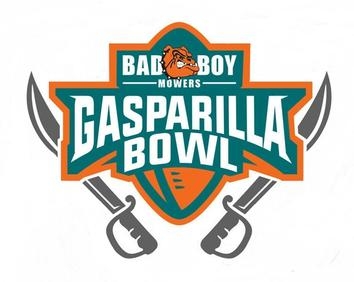 Ever since the demise of the late, unlamented Poulan Weedeater Bowl in Shreveport, there's been a gaping hole in the holiday college football schedule.

Thankfully, the previously vanilla St Petersburg Bowl turned up a gem of a title in its own back pages.

Then, the dudes in garish sports coats who run that show paired it with the only possible sponsor that could add to the attitude.

So, college football fans perched on couches everywhere can now raise a Cheeto to the first ever Bad Boy Mowers Gasparilla Bowl.

How would they not love a sponsor with the snarkiest commercials this side of WWF:

That's enough for apartment owners to go out and rent a lawn.

Machines as often as those deserve more than high-octane grass shredding. The world needs to see them invade the World Lawn Mowing championship and rent all asunder in their awesomeness.

As to the Gasparilla part, raise a Captain Morgan to 16th-century pirate José Gaspar, who used to maraud the Gulf Coast seas around St Petersburg.

Dude was into branding, big time.

Being raided by some random punk named Gaspar doesn't carry a portion of the pinache as being swashbucklingly relieved of property by Gasparilla. It's far better to leave the victims agog over their brush with celebrity.

Except for the dying part, kinda looks like fun, doesn't it?

Now you know where Tampa Bay's NFL entry got the inspiration for its name. Seriously.

The locals celebrate Gasparilla, too. With beads, even.

It's now easy to see why a Bad Boy Mowers Gasparilla Bowl was inevitable.

And the Temple Owls seized the moment more than FIU's Panthers did.

With that 28-3 pillaging, Temple did you proud.

Yesiree, what an atmosphere! This bowl has it all together.