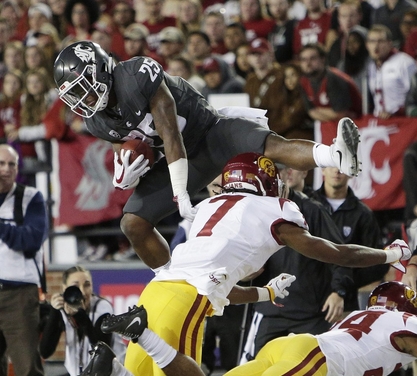 There are two terms in sports that can be annoyingly overused:

Sam Darnold is not a superstar, and Washington State's 30-27 victory over USC was not an upset.

If USC had an MVP in this game, it was punter Reid Budrovich, who pinned Wazzu deep in their own end time after time.

On the other side, give Cougar DC Alex Grinch credit for his Speed D concept, which kept the Trojan o-line -- and subsequently, Darnold -- off-balance all night.

Comparatively, USC's defensive scheme involved so much CB cushion, it looked like they thought Usain Bolt was gonna run routes. As a result, Luke Falk's take-it-and-go-quick passes to RBs in the flat were odds-on gainers that kept drives alive.

The series of the game happened after Uchenna Nwosu's quick-reflexes interception on the Wazzu 3. Coming after that Ronald Jones II 86-yard TD gallop, it gave USC a shot at going up, 21-10.

Well, it was predictable, but from three yards out, that shoulda been butter for the Trojans.

But ring up another for smaller and speedy, Grinch style.

As to the QB play, Luke Falk handled Leach's mythical one-page playbook consistently, and frankly, his check-downs were more productive than Darnold's.

That's why the gaggle of NFL scouts --  along with dudes from the CFL's BC Lions and Edmonton Eskimos -- in attendance were there to view both of them.

They saw what they shoulda expected:

Falk could well end up in Canada next season, and if Darnold declares for the draft next spring, as of now, he could wind up like David Carr.

Again, to anyone paying attention, this result was not an upset.

Wazzu's had plenty of time to hone their game at home this season. All five so far have been at Martin Stadium.

They've now got five of their next seven on the road, which will surely be bumpy with trips to Oregon, Utah, and Washington among them. But that's for another day.

Even with Leach at the helm, Washington State gets only a fraction of the pub that USC does ...

But he's assembled a quality team in Pullman capable of being competitive every weekend.

And big-brand USC, virtually entitled to favored status most seasons? They've got a lotta talent.

As we've seen time and again, that isn't always enough.