USC Rips a Win Away from Texas 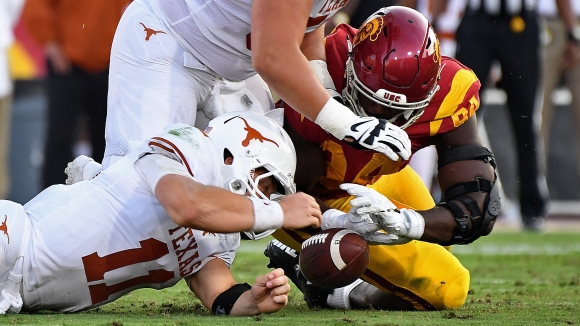 Do you think there are enough obvious reasons for your response to be, Anything but this:

An opening like the play before it is one thing.

But what in the name of Matthew McConaughey's Lincoln commercials are the Longhorns doing sending a frosh scrambler into a horde of bulked up humanity that's designed to die on a hill like that?

The kid didn't even know to wrap up the ball, even after fumbling another one away earlier on.

Still, that play was a perfect summary for all the foibles that came before it in an immensely watchable game. That's in spite of -- or maybe because of, for schadenfreude fans -- four Texas turnovers to USC's two, dropped passes amidst spectacular grabs, the 'Horns 10 flags to the Trojans' 8 ...

And yet, it was the sorta 27-24 2OT drama that kept USC undefeated and Texas believing it had improved over that bed-wetting against Maryland in Week 1.

The Longhorn defense was a polar opposite against USC. They must've been on the field for 12 of the first quarter's 15 minutes, doing stuff like you see as the highlight package opens:

At least Clay Helton didn't send him into a massive defensive line to do it.