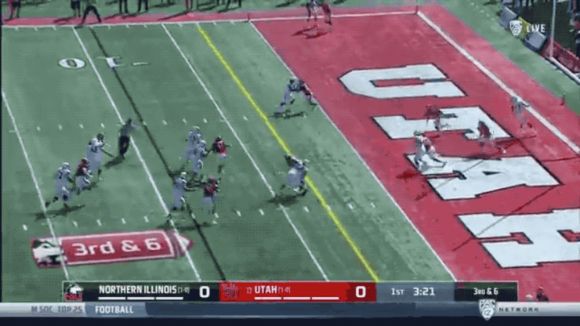 It's always harrowing when a player leaves his feet in an effort to gain additional yardage or score a touchdown.

QB's in particular risk life and limb when they decide to abandon the pocket and take off downfield.

However, some of these dudes are able to defy gravity and logic to avoid injury.

The NIU QB has a particular set of skills that includes the ability to perform Olympic-level floor routines while airborne.

Today's gymnastics program happened to coincide with his Huskies' game against the Utes of Utah:

Ross Bowers goes up and over for the touchdown! pic.twitter.com/uQ6bUNf73t

That's precisely what he did.

That really didn't look like normal human propulsion, as Bowers launched himself halfway through the endzone.

Of course, Bowers has yet to develop stealth capabilities.

This isn't his first rodeo, though.

Here he is getting his flip on for the University of California back in 2017:

That one was even more batshit.

And here he is back at Bothell High School -- a suburb of Seattle -- clearly preparing for college ball:

Okay, we'll allow those as well.