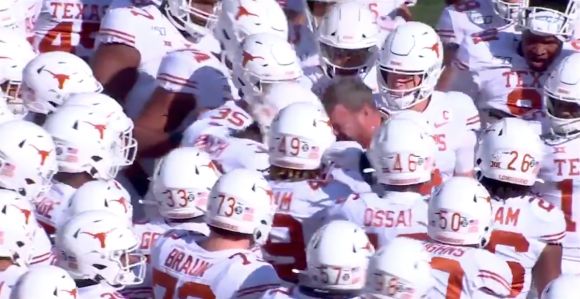 While big-time college football coaches of prestige programs are well-compensated, there's an awful lot of pressure to win on a regular basis.

These relentless expectations may have just claimed yet another victim.

University of Texas head coach Tom Herman is in no danger of losing his gig at the moment, but he appears to have completely snapped.

Before his Longhorns hooked up with Baylor, this leader of young men decided to go the extra mile to motivate his student-athletes.

Yeah, that's one word for it.

Most of the Longhorns looked on with a palpable mix of fear and confusion while their head coach was violently head-butting senior captain Malcolm Roach, who was definitely wearing his helmet at the time.

Dude may as well have been eating a W.

How about those @TexasFootball? Pay Tom Herman 5 million a year to head butt his players but can’t coach a lick. Getting his ass kicked by @BUFootball. Congrats For the 5 losses. Pathetic coaching.

Looks like those helmet head butts for Tom Herman didn't pay off.

Yeah, the Horns responded to their head coach's madness with a feeble performance in a 24-10 loss at Baylor, which dropped Texas to a decidedly mediocre 6-5 on the season.

Maybe Herman can pistol-whip a fan or mascot next week.