The Night the Lights Went Out at East Carolina 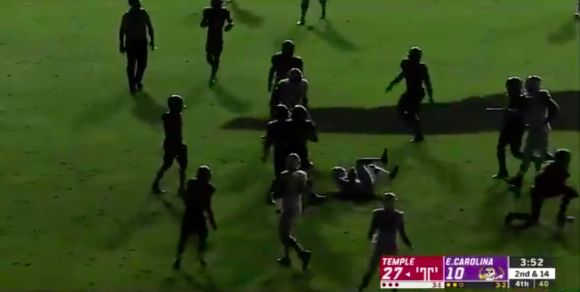 College football under the lights is a very cool scene.

When the lights are removed from the equation, it's a bit surreal.

An American Athletic Conference clash between the host East Carolina Pirates and the Temple Owls on Thursday night provided us with a bit of both.

Apparently, there was a rave scheduled on the same night, minus the glow sticks and house music.

Also, shirts appeared to be optional.

Well, you don't see this every day.

The lights just went out mid-game on Temple and East Carolina. pic.twitter.com/G3DSHepHm4

No, you really don't.

That broadcast team certainly got a hearty chuckle out of it.

So did this resourceful fan:

Meanwhile, the ECU mascot was amusing himself with the aid of props:

Steve the Pirate would've known what to do.

After a 15-minute delay, both the lights and sanity were restored, and the Owls held on for a 27-17 win.

Fortunately, looting was kept to a minimum.