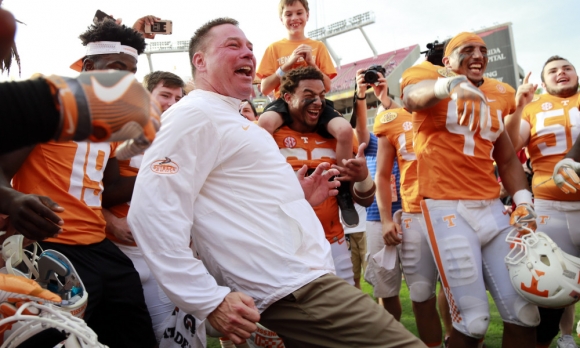 Apparently, championships are no longer won on the field.

It appears they can now be obtained in the fertile imagination of Butch Jones.

At a recent press conference, the Tennessee Volunteers head coach claimed that his team had already won "the championship of life".

What this insane declaration could possibly mean is anyone's guess.

Tennessee entered the season with high expectations and actually won their first five games, a couple of them in ridiculous comeback fashion.

However, things quickly took a turn for the worse with the Vols losing four of their final seven, including a season ending 45-34 loss at Vanderbilt.

However, none of this seems to matter in the mind of Butch Jones.

The SEC title is a mere afterthought, what with the Vols taking home the coveted Life Championship trophy.

The Vols are just piling up those moral victories, along with a healthy dose of derision from the Interwebs.

Of course, it's clear what Jones was trying to say, but that doesn't mean he should have said it publicly.

By the way, here's one more:

Glad to see that was updated.