Stanford Derails Huskies Down on the Farm 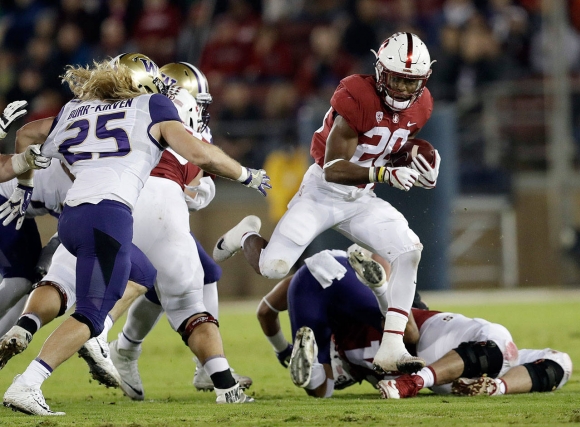 Bryce Love will deservedly get all the headlines for his performance in the Cardinal's 30-22 upset of Washington.

After all, dude rambled for 166 yards on 30 carries and found paydirt 3 times.

Even more impressive, he did it on a wonky ankle.

Still, two of Stanford's other units should share top billing with him.

It's no surprise that Stanford's offensive line had a telling effect. They're a trademark of David Shaw's coaching philosophy of intellectual brutality.

The other is the Cardinal secondary. Maybe they saw something in the game video of how Arizona State's DBs handled the Huskies. Whatever it was, they're why no Washington passing plays make the video clips.

Except for the game's final play, when Jake Browning had zero options and managed to choose the worst of those:

Another Stanford factor that became a thorn in Washington's side all night was a short, quick slant route off the line that extended a number of series.

How the shorter, quicker Husky DBs never adapted to it will surely be a source of discussion for Chris Peterson and his staff in the aftermath.

Both of these teams have a reputation for excellent in-game adjustments, especially at the half. Stanford won that chess match, too.

Most of Myles Gaskin's 120 rushing yards were in the first half when the Huskies were cutting through the Cardinal D like a hot knife through butter. In contrast, Washington had two possessions in the third quarter, what with their passing game already being neutralized.

The Big Game is next up for Stanford, where anything can happen and often does.

After that, Notre Dame comes to the Farm.

As shown against Washington, the Cardinal have a history of knocking off Top Ten teams there.

It goes without saying that game's do-or-die for the Irish.

Meanwhile, this victory made Stanford's season more interesting, too:

It's safe to say they could give a damn about the CFP bracket.

But a number of contenders around the country will give a damn about them. They probably already have.