Sooners Look to Put the Hurts on Houston

Published on 1-Sep-2019 by Sportbet Staff 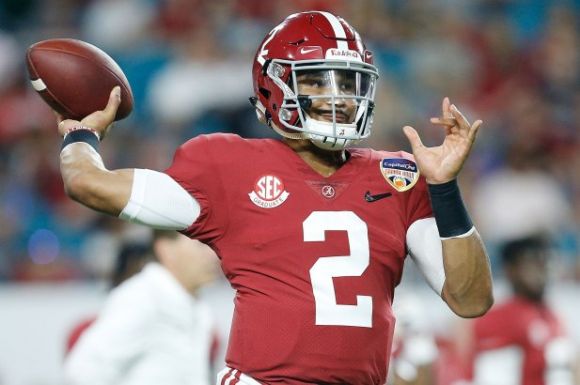 Here's the crazy thing about covering college football, if not football in general:

All eyes are gonna be on former Alabama slinger Jalen Hurts and how he does in his new digs.

What with QB-whisperer Lincoln Riley in his ear and a wealth of talent around him, it's no surprise that Hurts is getting the headlines.

But that's not where to look when considering a play on the Oklahoma-Houston game.

And that would be the Sooner defense.

Riley hired hotshot Alex Grinch from Ohio State -- who hired him away from Washington State after working miracles there -- so his offense won't have to keep trying to score 100 points to win a damn game.

Bovada has this one going off at Oklahoma -23 with the total set at 80 points. The moneyline's off the board. For starters, take a look at that line. It's actually come down from 24½, indicating that the sportsbooks figured it was a huge ask for a Week 1 matchup where danger might lurk.

Secondly, Dana Halgorson's now taken the reins at Houston. From his time at West Virginia, dude knows the Sooner system as well as any opponent does, and he's got a bitta offensive firepower of his own.

D’Eriq King is one of the nation’s most exciting quarterbacks, the receiving corps might be as talented and good as any the Sooners will face this season, and the running game will be strong enough to keep up the pace.

Well, because one of these days, they just might score 100 points a game.

The Cougars got gashed for 70 points by Army, who put both the Armed and Forces in the Armed Forces Bowl last season. D-Monster Ed Oliver skipped that game to get set for the draft, and he's obviously not gonna be in this game, either.

The Oklahoma offense, meanwhile, is loaded.

Hurts has RBs Trey Sermon and Kennedy Brooks -- dudes combined for 2,003 yards and 25 touchdowns last season -- to keep the defenses honest, opening up passing lanes for the fleet receiving corps.

CeeDee Lamb is the go-to dude, coming off a second-team All-Big 12 season that saw him haul in 65 passes for 1,158 yards and 11 touchdowns. Tight end Grant Calcaterra, a first-team All-Big 12 selection, is a big target with reliable hands.

The Sooners have already wrapped up the Most Likable Team honors, for whatever that's worth, and their fans oughta really like what Grinch will do with the talented raw material he's started to refine.

Oklahoma's gonna get their points. Halgorson's still installing his system at Houston. Gotta go with familiarity on this one. The Sooners will get at least 30 points through sheer magnetism while the other 23 or so will come via Hurts’ arm and legs. The rout will be on!