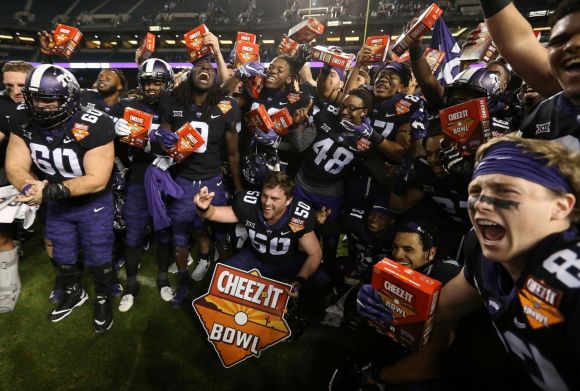 The TCU Horned Frogs and California Golden Bears were scheduled to play a post-season college football game on Wednesday night.

Instead, the two schools decided to start a dumpster fire.

Those lucky few who were in attendance at the globally esteemed Cheez-It Bowl for this turnover-plagued abomination will someday weep openly as they attempt to describe what they witnessed to their loved ones.

Perhaps it would be easier to simply show you:

Please try to stifle your vomit if you can.

Here are a few numbers to chew on, or regurgitate, if necessary:

Tonight's 7 INTs has broken Cheez-It Bowl record for most INTs in a game. Record was 97 game between Arizona and New Mexico. That game had 6.

Jaylinn Hawkins also has broken the Cheez-It bowl record for INTs with 3.

Actually, there were two more after that.

TCU QB Grayson Muehlstein completed seven passes to his team, four to Cal, and threw for 27 total yards in the game.

And as if four quarters of this shit wasn't bad enough, the game actually went to OT, much to the delight of sadists far and wide.

Casual bowl viewers: wow this is a bad game

In the first OT, TCU picked off Cal, but some suit on their sideline got a bit too excited.

As a commissioner, official, and ex-rules committee member, I’ve seen some crazy things on a football field. However, the #CheezeItBowl has jumped the shark with the SID taking a justified sideline interference penalty. Crazy stuff. pic.twitter.com/6tVmozr0Rr

Because of that buffoonery, the Horned Frogs were forced to start their subsequent possession from the 40-yard line.

Mercifully, they were able to kick a field goal to win 10-7 and end this waking nightmare.

This is quite obviously the logical by-product of rewarding two schools with losing conference records with an extra game.

Oh, and here's one more thought nugget for you:

There have been 3 MLB games in Chase Field history to end with a score of EXACTLY 10-7:

And now...one CFB bowl game with that exact score, too.

Ticket holders may want to check their email for information regarding possible refunds.