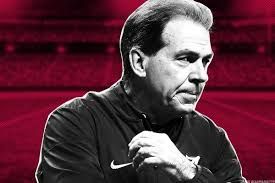 An important game prep for any sports play-by dude and his faithful analyst is filler compilation.

That's for when a blowout occurs, they've still got interesting background material to keep their audience tuned in.

And if any broadcast team needs a buncha filler, it's the Alabama Crimson Tide's.

Nick Saban could learn from them.

Every season, it seems like dude hits a lull in things to whine about, so he dips into his repertoire of oldies but goodies.

The thing is, they're too old and not so good anymore. Stale would be a better description.

However, for one of Saban's traditional bitch-rants, at least he's gone hi-tech.

Saban's been complaining for years that Bama students don't stick around to see the end when the Tide finishes off their latest clobber-fest of Southwest Nowhere State.

Now, thanks to the magic of technology and loose ethics, the dude who apparently tells school brass what to do has convinced them to go where George Orwell and Mark Zuckerberg -- to name only two -- have gone before.

Admin's dicked around with the game day option of an app called FanMaker to track which students are staying to the boring end of cupcake blowouts and which are playing fan hooky.

Here's how the surveillance works:

By comparison, the academic earnings equate to 100 points per credit hour, so a regular load would be 15 credits per semester, or 1,500 points.

The Tide regularly play seven home games per season, so sticking out crummy games to the end could come in handy for the Blutos, D-Days, and Flounders in the crowd.

What the Delta House coulda done with this system ...

shoutout to all the pledges who sit in the stands with 100 phones while their brothers/sisters go tap the postgame keg in the parking lot https://t.co/h2SpfiZ9OJ

No idea how Saban would respond, but it doesn't take much imagination:

Damn right it is.

It also doesn't take much thought to understand why Saban keeps harping on the student attendance. After all, he's got recruits at those games.

Not so incredibly, they consider factors such as campus life. The impression of a student body detached from the football program after visiting other schools where fanhood is rabid could well be a concern to a coach hauling down $8.3million a year because he's got a kickass program and wants to keep it that way by keeping up with the others on every aspect of it.

Checking a 17,000-seat student section that looks like a clearcut forest means Saban might have to come up with an awkward explanation to his next pre-NFL target.

As so many have asked before, though, wouldn't it just be easier to schedule better opponents?

If nothing else, student absenteeism at cupcake games proves they're not dumb. The real question, though, is what does doling out half the points they'd need to complete a semester just to attend a football game prove about Alabama's academics?