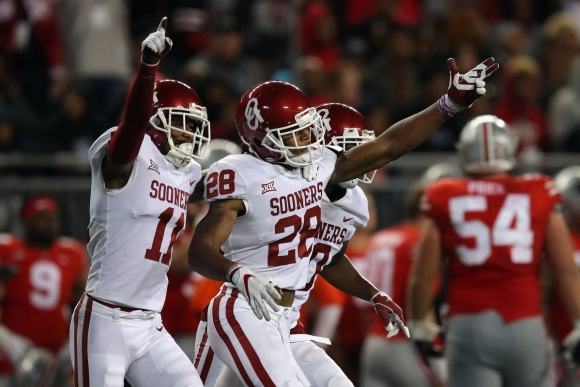 This remains as September's most useless question:

Mother Nature's even smirking at the thought.

After all, the only way anyone can make a choice between Hurricanes Harvey and Irma is to determine which one affected you the most.

Think of all the displacements:

At least the Northern Colorado Bears didn't have to worry about dodging Gators. Their game with Florida in Gainesville was understandably cancelled.

Their task now is to see about the hefty check they were supposed to pick up while getting their patooties kicked. Assuming Coach McElwain and crew had finally figured out how to do stuff like that.

Good Snark: Evacuate they did ... Frankly, given a looming Category 5 distraction, the Florida Atlantic Owls did their players and staff right by bringing them outta harms way to the serenity of Madison, Wisconsin. If anyone felt a need to stay behind, Lane Kiffin wasn't gonna say no.

On top of that, the University of Wisconsin offered facilities and resources so the FAU entourage could stay there as long as was needed.

Gotta say, too, that with all that uncertainty whirling around, Kiffin did a respectable job of directing the Owls -- 3-9 last year -- to a decent showing against a Big Ten title contender.

Bad Snark: Not the time to be a chicken hawk ... Arkansas State believes it's a Sun Belt contender again this season and may even have eyes on being the Other Five candidate for a New Year's bowl.

So measuring themselves against Miami in Week 2 -- and surely boosting the Jonesboro economy -- has been a circled date on their calendar for some time.

It's rarely mentioned, but Miami is an excellent academic institution. It also happens to have a renowned School of Marine and Atmospheric Science. If their data projections convinced the school's higher-ups to call off that trip to Arkansas, then it's gotta be respected.

Except the Red Wolves didn't.

Here's part of their AD's comment on the matter:

Not sure where they get their news in Jonesboro, but it seems the School of Marine and Atmospheric science had a point.

It just wasn't a good time to be away from loved ones down there.

Good Snark: The exuberance of youth ... Bob Stoops definitely has an eye for talent. It's early, but it appears he bestowed a super-duper gift upon the Oklahoma Sooners when he bequeathed his HC job to 34-year-old Lincoln Riley.

Hmmm. No Buckeye highlights in that clip.

Bad Snark: And for good reason ... There weren't any.

When viewed in the cold light of harsh reality, Ohio State's performance in the Oklahoma game didn't look much different than it did in the Indiana game, last year's Clemson game, and frankly, last year's Michigan and Michigan State games.

Fingers are being pointed at the offense, which deserves the scrutiny, but so does the Buckeye defense. How does a talented team with speed to burn get burned so much?

Being real, this is not a new problem. Wisconsin torched Ohio State for 450 total yards last year, and warning signs go all the way back to Urban Meyer's first season there in 2012.

To date, they've been able to mask it with entrenched brand identity.

There's always been that feeling they could shoot a sportswriter on Fifth Avenue and not lose AP or coaches' poll votes.

It's time for them to stat-pad for two games -- Army and UNLV -- before they meet Rutgers and Maryland. Neither of them have gone quietly so far. Those games were seeming walkovers before the season; now, they may take on a new level of urgency.

Good Snark: Husky Zig, Husky Zag ... A straight line may be the shortest distance between two points, but it's not always the most productive.

Washington must teach that philosophy.

They do special teams with a flair on Montlake. Did you notice Byron Murphy Jr -- Jersey No 1 -- make the first block that sprung Pettis and the downfield block that ensured he'd cruise into the end zone?

Not to be out-zigged, RB-turned-DB Jomon Dotson spent who-knows-how-many yards seeking the Northwest Passage before finding it:

The Huskies' warm-up tour continues in Week 3, when they meet Fresno State, hot off a thumping by Alabama.

While Texans who have a life are out there doing what they can for their fellow Texans, some neo wannabe just couldn't contain his warped, selfish priorities.

We'll probably find a cure for cancer before we find a way to eradicate bile like this. There's no choice but to keep trying.

Good Snark: Good hands people ... USC slinger Sam Darnold is the real deal, but it definitely doesn't hurt to have receivers who only need a ball tossed in their general direction.

And that was against Stanford, a team they could meet again in December.

Bad Snark: The reddish-gold dome ... Game day in South Bend is something special. Kinda like 15 April if you're coming from outta town. Hotel room rates get jacked up around 300%.

But hell, it's tradition, right? The Irish drip it. Like Army and Navy do. And other bygone powers like the University of Chicago.

The Irish may have been the first to make a cash grab for a national broadcast package, but circumstances have since transpired where the conferences have outdone them. It's been leaning on its brand ever since to stay relevant as an elite program.

Still, a status team like Georgia still gets a thrill outta beating them.

The question now is, should the Bulldogs be counting this as a home game?

And no, the Maroons aren't on Notre Dame's schedule. Yet.

Good Snark: The red-headed stepchild game ... No doubt about it. Mike Leach and Washington State is a marriage made in heaven, and their 47-44 OT victory over Boise State is another reason why.

So, Falk sets a school record for passing yards and gets pulled later for ineffectiveness, not a concussion. However, Bronco starting slinger Brett Rypien -- Mark's nephew -- did suffer a concussion.

Apparently both backups could use a Leach refresher on shuttle pass technique, too.

Bad Snark: Where's the band? ... OK, Baker Mayfield had pads and pals, but the Ohio State marching band had sousaphones, for chrissakes!

The Stanford band wouldn't have gone down without at least bending a trombone, because they didn't until one did.

Snarkalicious: Harvey and Irma  ... Because of course: