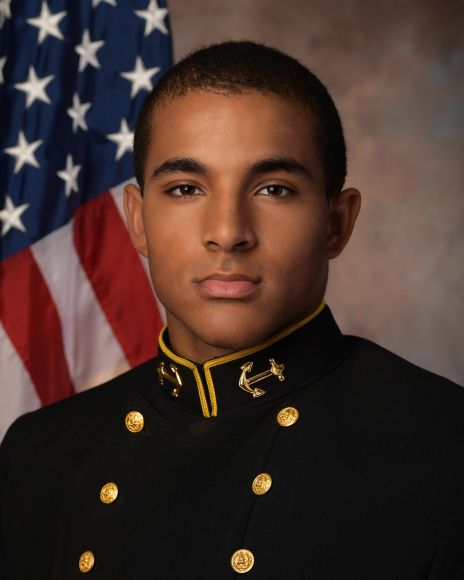 History was made at this year's Liberty Bowl.

The United States Naval Academy football team set a program record by winning its 11th game of the season by outmaneuvering Kansas State, 20-17.

Ironically, the Midshipmen usually win their battles with a surgically accurate ground game, but this victory was capped by a 4th-&-3 halfback pass the Wildcats clearly never expected that set up the game-winning FG as time expired.

Easily the most significant adjustment was Middie coach Ken Niumatalolo re-installing Malcolm Perry at QB. Ironically, Perry was removed from the position and converted to slotback because Niumatalolo thought the offense was becoming too one-dimensional.

Anyway, dude realized the error of his ways, put the 5-9 waterbug back under center, and watched him go. And go. And ultimately, during the bowl game ...

Malcolm Perry just became the FBS single-season rushing leader for a quarterback on that last run, passing Jordan Lynch who rushed for 1,920 yards in 2013 (14 games). Perry is at 1,923 in this his 13th game

Not only were dude's shifty skills on display, but when he did pass, he connected.

OK, that was only five times in seven tries for 57 yards, but it still produced what for Navy is a rare aerial TD to set the stage for their version of a razzle-dazzle finish:

Harkening back to Niumatalolo's ill-fated decision to line Perry up at slotback, the biggest flaw in that logic was he was the team's best option to run their offense.

However, dude may do well at that position in the NFL.

If it happens, Perry could be the first service academy player to benefit from President Trump's executive order that allows them to defer their military obligation and go directly to the League.

The Pentagon may have not been keen on the issue ...

This policy will definitely make better use of this crowd's talents better than any morale-building intrasquad game among the enlisted dudes.

The thought's been put out there that Perry could be the next Julian Edelman. It's not an outlandish comparison. After all, Edelman's only an inch taller and played QB at Kent State.

Safe to say he transitioned rather well.

Perry accepted an invitation to the East-West Shrine Game, and it's already a given he's gonna get snaps as a receiver.

He'll have a week of practices to show what he can do and then go live on Sat 18 Jan. NFL scouts will be there in force the entire time with a combine invitation at the ready if things go Perry's way.

Odds are he'll get his shot, which beats the hell outta getting shot at. For a couple of years, anyway.