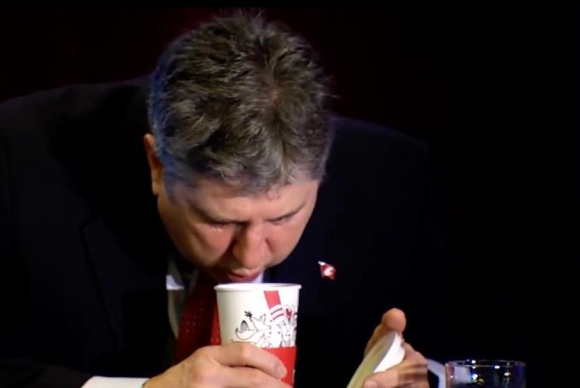 Washington State's Mike Leach draws a crowd for more than his stripped-down, read-&-react offense that fires footballs all over the place.

Leach is ready to go if the conversation turns to football, but he feels no compunction to stay inside the lines.

For example, his classic wedding prep video should be required viewing for every bachelor preparing to take the plunge:

So, leave it to The Pirate to steal a show by not saying anything.

Dude's used to it. Sometimes, it's that way when he's the only topic in a story.

Still, Dantonio had his day.

Wazzu went into the Holiday Bowl without Luke Falk, their record-setting passer. As bad, star defensive lineman Hercules Mata'afa was suspended for the first half due to a targeting call in the Apple Cup.

Not sure if it woulda made that much of a difference. Sparty's no joke:

State's 42-17 victory was an accurate indicator of how the game went.

After Wazzu's first drive, it was Green-&-White all the way.

They'll definitely make themselves known again to the Big Ten next season.

Meanwhile, the Cougs like Tyler Hilinski, Falk's heir apparent, who did what he could in this game. However, their future is probably in the hands of Cammon Cooper.

Leach worked wonders with Connor Halliday and Falk, but Cooper's easily the best talent he's ever attracted to the program, football-wise.

Wazzu's got one of the top communications departments in the nation, counting Edgar R Murrow and Keith Jackson among its graduates.

Maybe now he'll have time to do some recruiting for them.