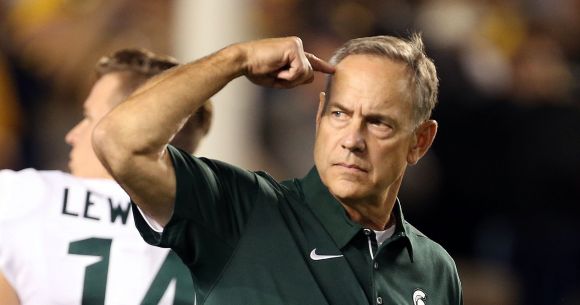 Things have most certainly been better in East Lansing.

The once formidable Spartans now sit at a bland 4-4 after yet another lifeless performance in a 28-7 home loss to Penn State.

Sadly, this was on the heels of a bye week, which was presumably used to prepare for the visiting Nittany Lions.

Of course, evidence would suggest otherwise.

It appears that Michigan State is still capable of beating Big Ten afterthoughts like Northwestern and Indiana, but  dudes run into some trouble against the conference elite.

Sparty lost by a combined score of 72-10 at Ohio State and Wisconsin, so we feel it's safe to make such a declaration.

However, despite all these negative vibes, longtime head coach Mark Dantonio doesn't seem all that concerned about it.

You see, Coach Dantonio is what we like to call an optimist.

He also might want to check those numbers again:

That math right there explains how they had 12 men on the field. 4+4=8 2+7=9#TheSpartanDifference

Mercifully, a visit from Illinois in two weeks will likely add another win to the equation.

But remaining gainfully employed is important.