Guns, Butter, and the SEC 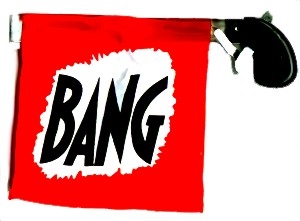 We see poor concepts and misguided notions every day.

There are also your garden variety bad ideas.

But then, there are rare instances when a notion qualifies as the worst idea ever conceived.

Recent developments out of progressive Arkansas may have just provided such an idea.

Yes, a bill that will permit those with concealed handgun licenses to carry their presumably loaded weapons in various public venues has been signed by visionary Arkansas governor Asa Hutchinson.

In case you're wondering, these public venues include bars and government buildings.

And, oh yes, colleges as well, which would include the football stadium and basketball arena used by the University of Arkansas.

Finally, a group of lawmakers has figured out how to combine guns and excessive alcohol consumption into a productive union.

Sanity has mercifully prevailed, though.

The backlash to this pending law was so immediate and absolute that the Arkansas Senate has introduced an exemption for sporting venues from the bill.

Jeepers, they sure know how to ruin a good time.