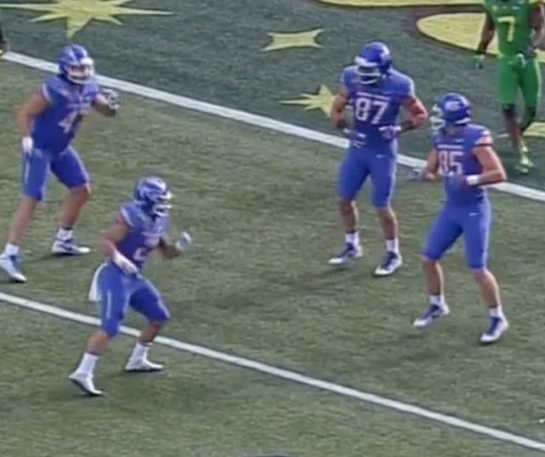 Even though Chris Petersen has moved on, Boise State still remains as the gold standard for trick plays.

This year, Broncos coach -- and former Petersen understudy -- Bryan Harsin has added a new twist to their reputation.

Or, more accurately, a new spin.

Maybe Harsin figured it was such a natural occurrence ...

It just had to happen in human form.

And it had to set the bar higher than this:

Here's their latest contribution to flashy football, unveiled in the Las Vegas bowl against Oregon:

Maybe they just did it to set something else up.

This version of the spin later in the game saw the tailback stop behind QB Brett Rypien with the receiver trio continuing to where you'd expect them to be on the other side of the linemen:

Whatever the purpose, the Broncos didn't really need spins.

They handled Oregon rather handily, 38-28, in a game that wasn't really that close:

So if nothing else, they'll give Mike Gundy & Co something to wonder about until then.