Published on 7-Dec-2013 by Stacey Mickles 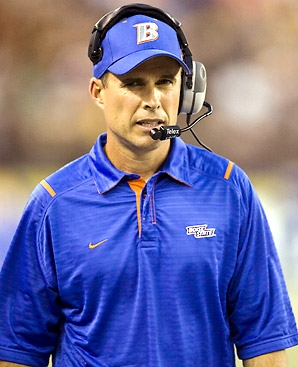 I guess the timing was finally right for Chris Petersen to leave Boise State.

To many college football fans across the nation, the stunner was that he spurned seemingly more glamorous jobs, such as USC, and signed on to be the next head coach at Washington. However, from far and wide, prevailing opinion was far and away that the Huskies not only trumped USC with this hire, they pulled off the coaching coup of the year.

Was it the money? The Huskies are showering Petersen with a five-year, $18million deal that will make him the highest paid coach in the Pac-12. Yes, that includes Steve Sarkisian's contract at USC.

But the more you dig into what makes Petersen tick, you get the feeling that it's not all about the money. After all, the $2.1million he was earning at Boise State compares well with whatever USC might have put on the table and what he accepted from Washington when cost of living, easy access from home to work, etc are tossed into the mix.

Having said that, it's not been uncommon for Husky coaches to buy a home in the fashionable east side of Lake Washington and speedboat to work, where they can moor on the university's west side shore.

But still. Washington hasn't really competed on a national championship level since the early 90's under Don James. USC is usually not only in the hunt every year, it frequently wins. With its probation about to end, allowing the Trojans to field a full complement of 85 scholarship players again, USC could be well placed to become a major force yet again.

If you could compare who got the better deal in coaching hires, you'd have to say Washington. Petersen took Boise State from obscurity to BCS bowls and being mentioned in the same breath as national powers. That's because his Broncos often beat national powers, from Georgia to Oklahoma to -- wait for it, Husky fans -- Oregon. And he beat the Ducks twice.

Boise State was one of the reasons college football went to a playoff system, so teams like theirs would have a chance to win a national championship. In that sense, Peterson is a pioneer. A game changer.

But ironically, the game itself was changing around him. Money got bigger for the Power 5 conferences. Realignment left Boise State outside those leagues. It appears that getting into the new playoffs will be an even more distant dream for schools outside the big-brand leagues.

This can explain why Petersen started looking around. But why would he reject the likes of USC?

Sometimes the media latches on to a superficial phrase to describe a situation, and that phrase spreads like wildfire as other media pick it up. This seems to be happening as a rationalization for Petersen's decision. You hear that he doesn't like the bright lights of the big city. That he's camera shy.

Then why didn't he choose to go to a small-town Pac-12 outpost like Pullman?

The Seattle area has a population of 2.5million, with its share of bright lights and big cameras. And when Husky Stadium sells out, it seats more fans than the Seahawks at the Clink. And by all accounts, Sarkisian may have just produced an 8-4 record, but he didn't beat the right teams and was constantly hearing about it. So Washington definitely puts its coach in a fishbowl, and for Sarkisian, the water was getting hotter.

No, in Petersen's thought process, something deeper was occurring here. And all it takes is a longer look at how he ran the show at Boise State to find it.

Chris Petersen is a control freak. Total control. He closes practices. He limits players' exposure to the media. And so on. In short, the method to his success looks quite similar to Lane Kiffin's, with the vital difference being he has a reputation of being straight as an arrow.

He probably didn't need long to see that scenario wasn't going to play out at USC. Ah, but Washington is another story. Husky Nation still worships its own straight-arrow control freak whose very nickname left an indelible image as to who ran the show: The Dawgfather himself, Don James.

This is surely why Chris Petersen chose Washington.

He's selected his fishbowl wisely. And now he's got four of the five years in his contract to keep the water tepid instead of turgid.