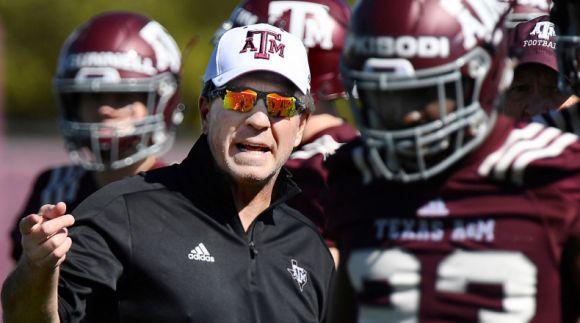 Now that Dabo Swinney's worked his magic at Clemson for a few seasons, the issue anymore isn't whether or not they'll be upset by an opponent.

It's how close the opponent comes to doing it.

At both Florida State and Texas A&M, Jimbo Fisher has found ways to take that Tiger by the tail and make games interesting. It can be argued that slinger Kellen Mond -- from Week 1 to Bowl Season -- was the most improved player in 2018. Dude did a solid job against Clemson last season, but as usual, his effectiveness is gonna depend on his protection.

That O-line's got its work cut out against a stingy Tiger defense, but if enough holes can be opened for Jashaun Corbin to generate a balanced offense, the Aggies could keep this one close deep into the game.

Here's what a bad day at the office looks like for QB Trevor Lawrence: his offense averaged 8.0 yards a play and rolled up 632 yards with his passing stats being a meager 13-23 for 168 yards with 1 TD and 2 INTs. To the surprise of absolutely no one, this is not a one-dimensional offense.

Travis Etienne is there, as usual, to answer the bell when called. Dude rambled for 205 yards in only 12 carries against Georgia Tech, finding paydirt three times. And, if for any reason, either player goes down, the Tigers will merely run another four-star athlete out there. That's true on defense, too.

Death Valley's gonna be a different atmosphere altogether. Fisher may be able to tell his crew what it's like, but only their experience in the other Death Valley will offer anything close to it. That can be daunting in itself.

Look for the Aggies to take away one aspect of the Tiger offense and take their chances containing the other one. They've got the personnel. The question is whether they'll get enough breaks to do it. Here's where their SEC pedigree gets put on the line.

Noah lives and works with a simple philosophy of “Eat, Drink, Football.” This is embodied through a dedication to satellite TV, Indian delivery, Folgers in his cup, and Budweiser. He lives in a secret lair with his beautiful concubine.