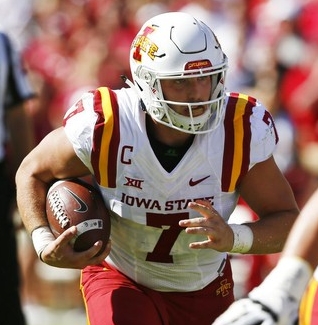 Oklahoma was coming off a bye week, and the Red River Rivalry with Texas is on the slate for next week.

So this coulda been a trap game, but it didn't really look line one.

Perhaps the difference was on the other side of the ball.

Iowa State has been in with a shout against quality teams this season. Second-year coach Matt Campbell seems to be making progress.

What made this upset stunning is the Cyclones did it without starting slinger Jacob Park.

Campbell thus did what coaches get paid to do: make an executive decision at the last minute:

Just one more reason why Iowa State went into the Oklahoma game as prohibitive 31½-point underdogs.

It's also a continuation of an apparent Sooner tradition.

Did TCU's long-yardage pass defense package show up in Cyclone jerseys at the end? And how about the wideouts' downfield blocking skills!

In retrospect, Oklahoma pointed out their red-zone fumble as the game's pivot point, and they're probably right. The Sooners were cruising until this sequence happened:

Joel Lanning, by the way, came to Ames as a QB and switched to LB this season.

Dude became the Cyclones' first two-way player since 1971, which was a long time ago.

And it's a longer time to December.