Arkansas Does That Sooey-Pig Thing All Over Texas A&M 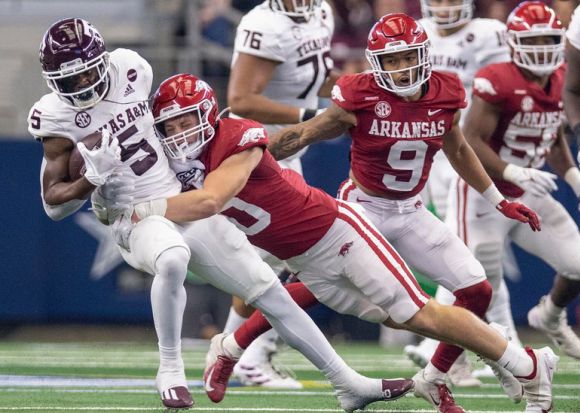 There once was a time in college football when a game against Arkansas was to be taken seriously.

That was back in the old Southwest Conference, when the Razorbacks gave as good as they got against the likes of the Longhorns and Aggies.

Iconic coach Frank Broyles built them into a national power, featuring talents such as slinger Joe Ferguson and roster stalwarts like Jimmy Johnson and Jerry Jones.

That sorta respect has been rare since then, and when it was on the verge of returning, Coach-at-the-time Bobby Petrino dashed it all by getting a bit too close to one particular student body.

Since then, Arkansas has basically become SEC roadkill. Dudes didn't even win an SEC game during the 2018-2019 seasons.

And then Sam Pittman showed up.

Actually, he returned. OG spent 2013-2015 as the Hogs' offensive line coach before taking the same position at Georgia, because he's that good. Been doing it his entire coaching career.

It's not common anymore to see a major college coach get his first gig at 58, but that's what can happen when a coordinator's job isn't on the résumé.

Fitting that Sam Pittman gets hired during Broyles Award week. Since 1994, he’s made 11 stops as an assistant coach. He’s earned his shot. Looking forward to watching good line play .

Maybe that's changing. Oregon's Mario Cristobal was a renowned lineman at Miami and grew into an excellent OL coach in college; his only coordinator experience was a shared one under Willie Taggart with the Ducks.

Maybe it'll change even more after Pittman's first two seasons with the Razorbacks.

OG coached Arkansas to three SEC victories last season, and he's already got his crew outta the gate at 4-0 this year.

Being real, Texas is more hype than substance, so their 40-21 shellacking of the Longhorns wasn't exactly an ambush. It still sent Hog Nation into delerium, though, and not just because it was the hated 'Horns they crushed.

Pittman had whipped the Razorbacks into shape in the trenches. They punished Texas physically and fundamentally. Their defense was stout, and their QB who looks like a LB -- KJ Jefferson -- is making the most of his crew up front.

Texas A&M can attest to this, as they had few answers in the 'Saw's 20-10 triumph at their expense in the JerryDome:

Kinda hard to believe Pittman was a virtual afterthought in the hiring process.

However, they got a coach who -- at the start of his tenure, anyway -- may be Old School, but he's in tune with where college football is today, what with the transfer portal and all it's brought to the table.

Safe to say he's making the most of both worlds.

Next on the docket is the real reality check. Again, gotta play who the schedule serves up, but ...

Moseying down to Athens for a date with Georgia is gonna be another experience altogether. As in an 18½-point underdog experience, which is still giving Arkansas more due than they've had a chance to earn yet.

That's not how Pittman and the Razorbacks are viewing it, of course.

This isn't the way roadkill thinks.

Arkansas will prefer to take stock of the situation after it's in the books because that's what contenders do.

So if everything eventually falls into place, there could well come a day ...