Zags Pick the Right Time to Be Ranked No 1 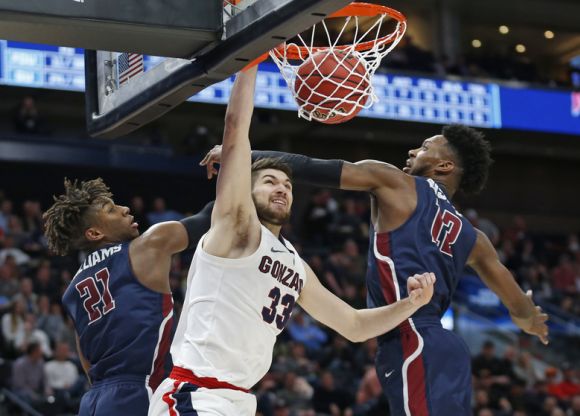 As teams race toward what oughta be one of the most wide-open Dances in a decade, they've been spreading the ranking wealth around like never before.

Yes, we all know that being No 1 in November-December and a fiver will buy a decent pint. We also realize that in-season college rankings are probably the best PR promotion ever invented.

But, hell, it's the world we live in, and somebody's gotta hold up that one finger.

OK, that other finger. This is the one for everyone else.

Except maybe the sport's bluebloods, like Michigan State, Kentucky, Duke, Louisville, and Kansas. They're in it for the NET right now, putting their players through the non-con paces. You know ...

Next up is conference play, where everything gets turned up a notch and the analytics that decide tourney seedings become incestous.

Simply put, the West Coast Conference is their bitch, with the odd St Mary's or BYU tossing a dart on their board every now and then. The Zags are so dominant -- and a WCC cash cow -- that they even forced the conference to cut back their schedule by two games so they can play more high-profile non-cons where the dosh is split fewer ways.

So, while the Jayhawks were falling in a great game at Villanova ...

The Zags were mopping the court against North Carolina in Spokane, 91-84, in a situation where any Tar Heel fan will remind you that injuries are part of the game.

Don't tell the Zags about injuries. They lost French stalwart Killian Tillie -- arguably their best player -- for most of last season.

And he's not able to go full-speed yet.

What's more, in Gonzaga's only loss this season -- to Michigan in the Battle 4 Atlantis title game -- dudes were down to a seven-man rotation while playing their third game in three days.

They, too, well know that injuries are part of the game. A team's gotta play with who's available.

Now, with their non-con gauntlet virtually behind them, Gonzaga's found yet again, who they had available was good enough.

So sayeth the pollsters. They're the new No 1.

With only Detroit Mercy to sweep aside before WCC play begins, Gonzaga will likely spend the next two months tuning up for the Dance.

That's obviously when the real No 1 gets rewarded, and unless they get caught mailing it in somewhere, dudes plan to be the ones reaping it.