Will the Zags Overcome Ducks and Injuries in the Battle for Atlantis? 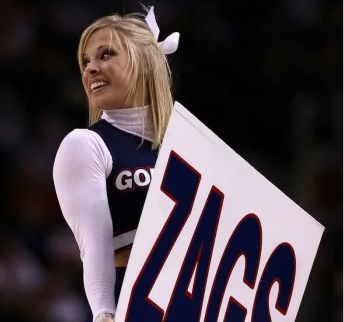 Not that it matters, but Gonzaga's actual mascot is the Bulldog.

Apparently, it's much more distinctive to refer to the team as Zags.

Like the zillions of other teams in North America that call themselves Bulldogs, though, Gonzaga surely chose that mascot to symbolize its toughness in competition of any sort.

If nothing else, that explanation beats the alternative:

In that regard, no one disputes why Oregon, with its rainy winters, is known as the Ducks. The only unique aspect is they were originally called the Webfoots.

What's all that got to do with these two teams coming together in a Battle for Atlantis semi-final?

Nothing, really, except to have more stories to tell at the pub and underscore how feisty these two squads are when they hit the court.

Wouldn't have done that to a bulldog.

However, if they're ever gonna try, it's today. The Ducks may be a young team -- except for Payton Pritchard, who's been around forever -- but they've been impressive in winning quality non-con games against Memphis, Houston, and -- here in Atlantis -- Seton Hall.

Oregon is showing a strong inside game and keeps opponents relatively honest with the occasional trey from Anthony Mathis and Pritchard. Ironically, though, the Ducks are not good rebounders. The raw power is there in the form of CJ Walker, but technique is often lacking.

Few teams spread the wealth and game responsibility like the Zags. Dudes lost four starters -- only Corey Kispert remains -- but Mark Few and his staff can reload with the best of them and look for well-rounded team players.

As such, Gonzaga finds fertile ground overseas, and Serbian Filip Petrušev is a prime example. Dude absolutely destroyed the competition this summer with the Serbian U19 team, and already fits well with grad transfers Admon Gilder and Ryan Woolridge.

If the Zags have an issue right now, it's Killian Tillie nursing a sore knee and so-so free-throw shooting. After missing the Southern Mississippi game, he's expected to play against Oregon.

Oregon is by far Gonzaga's toughest opponent to date.

Look for them to cover, though. They've got a history of proving their capabilities against strong opponents, but with injuries limited them to a six- or seven-man rotation, fatigue becomes a factor. The Ducks may be coming off a draining game against Seton Hall, but look for them to have an edge in a back-to-back situation if the game gets close.