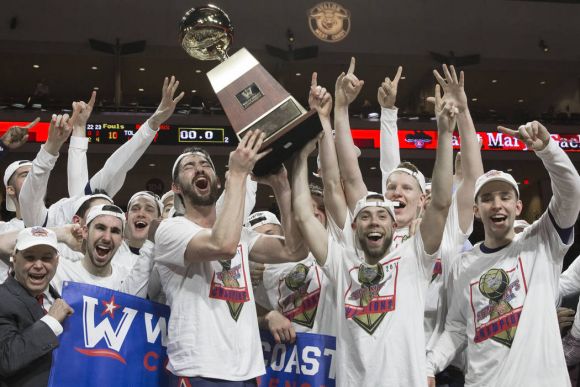 If the St Mary's Gaels learned anything the first time they met Gonzaga this season, it was they had no chance of running with them.

Duly chastened, dudes focused on defense and rested on offense less than two weeks ago, on Sat 2 Mar in Moraga and got respectfully schooled, but they thought they were on to something.

Not that the Gaels solve one of the universe's burning mysteries or anything, but ...

Coach Randy Bennett figured if his crew extrapolated on that second game's theme --going Hank Iba, short shorts Old School on the Zags -- they might have a shot at taking the front door into March Madness by freezing them outta the West Coast Conference championship game.

This game slowed down to such a point that they almost brought back the original hoops rule of doing a jump ball after every basket.

The Gaels had been working on the clock-chomping offense and shutdown defense -- mainly by clogging the key -- ever since that stomping in Spokane and went 6-1 with it. Their only loss was to the Zags in Moraga.

So, dudes were ready and proved it with a methodical 60-47 Dance-clincher:

Damn. Are post-game on-court interviews useless or what?

Bluntly, the Gaels reduced Gonzaga to standing on offense, not reacting to secondary coverage on the ball, and impatiently launching shots. Somehow, the Zags never figured it out, as the stats show:

Other than bruised egos, this loss didn't do much for Gonzaga other than to be aware that whomever they'll be facing in the first two rounds of the tournament will have dissected St Mary's approach ad nauseum. They're still odds-on to be a top seed.

Gotta get back to work. Final thought: Don’t overreact to a single loss by clearly one of the country’s four best teams. If Zags had lost this game a month ago, the conversation wouldn’t exist.

The Gaels, though, will actually be carrying more of the WCC's hopes into combat.

The conference has argued that they're getting stronger, and a win or two in the Dance would raise all boats' hopes for a bit more respect.

In essence, then, St Mary's has just morphed from feelgood underdogs to a team of justification.

But they're in the Dance. They're fine with that.