Rick Pitino Goes Off on a Fan in Chapel Hill 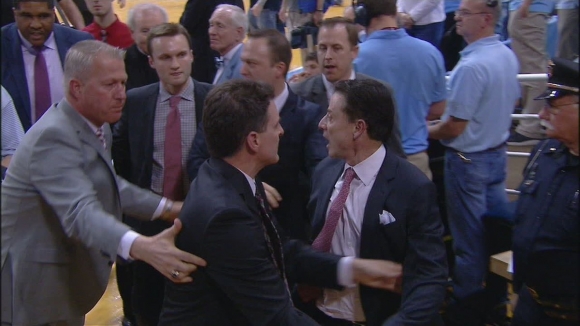 Big-time basketball coaches are accustomed to being verbally harassed in hostile venues on the road.

As such, they've built up a healthy reserve of antibodies against these attacks, rendering them immune to the treatment.

However, every once in a while, the armor is penetrated.

Apparently, this is what took place recently at halftime of a Louisville visit to UNC.

Yes, that's Rick Pitino being physically restrained by a cadre of Louisville assistants and dragged to the locker room.

What exactly set off the veteran coach?

It appears Pitino was simply informed that he sucks.

This opinion was not rendered by a cartoon infant though, or even a silly college student.

It was actually a 40-something Tar Heel fan flexing those intellectual muscles.

When Pitino realized it was a middle aged adult yelling at him, he took exception.

That is sage advice, but based on the quality of his remarks, it may be too late for this particular dude to acquire one.

Pitino was having a rough night before this incident, as he'd already mixed it up with the officials over a call or two.

Things didn't improve much after halftime, with the Cardinals eventually losing 74-63.

Hopefully, Pitino can keep it together going forward.

As for the fan in question ...

Probably going back to the basement.